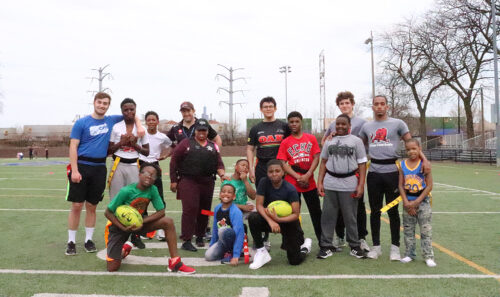 The Lions for Hope Sports Complex will provide a safe place for the community to gather. Athletic fields will provide at-risk children the opportunity to participate in a variety of sports and extracurricular activities within their own community. Athletics and education come together by forming partnerships with local schools and community organizations to provide mentoring programs that encourage children to stay in school.

We will accomplish this by:

Founded in 1964, the Chicago Lions Rugby Club has grown into a powerful and inspirational organization. With targeted recruiting and dedicated coaching, the Lions secured 16 Midwest Championships between 1966 and 2000 before joining the Super League where they would make the 2007 Championship game.

In 2007, Lions’ President, Keith Brown connected with the founder of Chicago Hope Academy, Bob Muzikowski. Keith and the Lions were impressed by Hope Academy’s vision of transformative change Chicago’s Near West Side and its youth. Keith and Bob subsequently formed a unique, mutually beneficial partnership, allowing the Chicago Lions and Hope Academy jointly to serve the deserving youth of one of Chicago’s most at-risk areas.

The Lions-Hope partnership led to a first-ever high school state championship in 2015 for Hope Academy’s rugby team, as well as a new rugby field, the Lions for Hope Field.

This is a great opportunity to give back to the Chicago community!

If you’re interested in helping the CLCA and want to learn more, please get in touch. If you do not wish to donate online, you can mail a donation to:

Donate to the Complex
Scroll to Top